The Department of Defense’s Defense Innovation Unit Experimental (DIUx) has inked a $400,000 contract with the airspace security company Dedrone, the company announced on Tuesday.

Dedrone provides both hardware and software solutions for finding, tracking, classifying and “neutralizing” malicious drones — like a hacking drone circling a datacenter or, in the case of the military, unauthorized flights near a base.

“DIUx and DoD are experimenting with Dedrone’s technology in assessing, measuring, and responding to adversarial UAS threats as they relate to flight operations and base security within the United States,” a press release reads.

The company recently conducted a two month pilot program at Joint Base Myer-Henderson Hall, during which the software detected a number of drones despite the fact that the Virginia facility is inside the no-drone zone around Washington, D.C.

Now, Dedrone and DIUx are entering into a “permanent” partnership. DIUx has acquired Dedrone’s equipment, including hardware sensors for detecting radio frequency and DroneTracker, the company’s software product, which gathers data from these sensors and collates information about threat level, flight path and more. A Dedrone spokesperson said DIUx now has free reign to experiment with the tech how they see fit and will “not necessarily” disclose which bases the research will be conducted at.

“Anecdotal information of drone incidents near military bases are leaving military security personnel with insufficient details about the nature of airspace threats,” Joerg Lamprecht, CEO and co-founder of Dedrone, said in a statement. “Our partnership with DIUx is an opportunity for us to work directly with military installations and inform defense leaders on how to protect military airspace against rogue drone pilots.”

Counter-drone technology has long been of interest to DIUx. And as drones proliferate it’s becoming an area of focus for other parties as well — the Air Force recently wrapped up an inaugural accelerator program focused on counter-drone companies. And a recent National Academies of Sciences, Engineering, and Medicine report, sponsored by the Army, warned of the dangers that swarms of drones could present to the military.

“Unless potential threat sUAS capabilities and counter-sUAS efforts are addressed more rapidly,” the report stated, “the vulnerabilities of dismounted infantry and lightly armored vehicles to sUAS threats will grow extremely quickly, potentially to the point where force protection standards cannot be met for soldiers in the field.”

“Drones pose a number of potential threats from espionage and threats to physical security,” the Dedrone press release notes. “Most notably, drones have nearly collided with Coast Guard and Army helicopters, disrupted Air Force and Central Command flight operations, among other incidents both domestically and abroad. Defense cannot exist without detection, and Dedrone technology provides an opportunity to proactively detect drones and understand airspace breaches before any defeat technology needs to be deployed.” 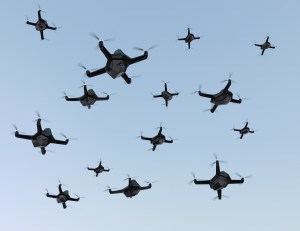