Esper told reporters during a press conference at the Munich Security Conference in Germany that he “never felt pressure from the White House” to review the JEDI contract, according to a transcript of the briefing.

After his confirmation as secretary of Defense, Esper launched a review of the JEDI acquisition that he ultimately recused himself from roughly a week before the Department of Defense announced it had awarded the contract to Microsoft. Not long before Esper’s review began, President Donald Trump told press at the White House he was going to “take a very strong look at” the JEDI acquisition, referencing “tremendous complaints” about the competition for the procurement in relation to Amazon Web Services.

Amazon went on to lose the competition for the contract and has since built a lawsuit protesting its loss around allegations that President Trump influenced Esper’s review and the department’s award to Microsoft. AWS has asked the court to order depositions of Trump, Esper and former Defense Secretary Jim Mattis in an attempt to better connect those allegations.

Esper told reporters he wouldn’t discuss his talks with Trump or the White House but said: “The decision to conduct a review early on was a decision I made.” Esper said he came to the decision to review JEDI as he met with lawmakers on Capitol Hill prior to his confirmation and “heard a lot from members on both sides of the aisle” about the $10 billion commercial cloud contract.

Because he wasn’t involved in the early developments of JEDI — he was Army secretary at the time — Esper said “I knew that it was something I needed to learn a good deal about. And I took the time [to] educate myself.” However, last October he suddenly recused himself from any matters relating to JEDI because one of his sons worked for IBM, a company that bid on the contract.

JEDI is currently held up in court with AWS’s protest, and as of last week, the Pentagon was barred from entering any new work under the larger contract.

While Esper didn’t comment on that latest development, he took the opportunity to reinforce the department’s stance of how important it is to acquire commercial cloud capabilities as soon as possible.

“We have to move forward. It has gone on too long,” Esper said. “And I hope we can get over this … latest issue and keep moving forward to deliver to our warfighter the capabilities they need to fight and win on the battlefield.” 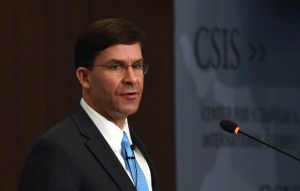