The Library of Congress is feeling very confident about the IT improvements it has made in recent years.

During a Senate hearing Thursday, Librarian Carla Hayden said her organization has “significantly improved” its situation since a 2015 Government Accountability Office audit called out “significant weaknesses” in the library’s IT management. To date, Hayden said, the library has closed “nearly 95%” of the GAO’s recommendations. It intends to close out the remaining percentage by the end of this fiscal year.

“The library is a different organization from what it was just a short time ago,” Hayden said. “We have stabilized our core IT structure, we have streamlined and strengthened our IT governance and we have centralized and professionalized our IT workforce.”

Library CIO Bernard A. Barton Jr. testified that the organization suffered from a “lack of vision” and “lack of oversight” rather than any lack of talent when he took the job in September 2015. Indeed, one of the GAO’s main recommendations in 2015 was that the library hire a CIO after going without one since 2012. Clearly, that task has been completed.

The Library of Congress’ IT systems underpin its growing focus on digital technology as a way to “bring the Library to our users.” The library’s Labs team has worked on digital initiatives from crowdsourcing captions to make old American newspaper archives searchable to using geographic information systems to tell stories and beyond.

Tech developments haven’t always been smooth sailing for the library, though. In 2018 some transparency advocates criticized the library’s new public-facing Congressional Research Service Reports website for being incomplete and “unreasonably expensive.” 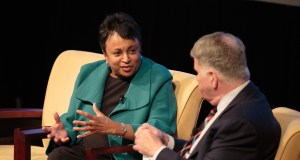 Library of Congress says it has ‘significantly improved’ IT