Eric Schmidt thinks Secretary Jim Mattis should establish a Department of Defense program through which senior leaders can participate in technology and innovation training programs. The goal? This will warm leaders to the idea of supporting innovation within their departments.

This recommendation is one of two that outgoing Alphabet executive Schmidt and his fellow Defense Innovation Board (DIB) members formally adopted at a public meeting Wednesday. The board professed excitement about what this recommendation could mean — “I’m strongly in favor of this,” Schmidt said.

The other recommendation entered into the record this week urges DOD leadership to create a new “Innovation plus STEM” (or I-STEM) career field in the military. The current career structure, DIB member Instagram COO Marne Lavine argued, doesn’t really have a place for these people, so DOD is missing out on hiring them.

Both of these recommendations, as well as another two, were first introduced at the board’s last public meeting in October 2017. The other recommendations, including an “accelerator” concept for major tech initiatives, were also discussed Wednesday, but the board was decided they’re not quite ready for prime time. “We’re eager to get the thing fleshed out,” Milo Medin, Google’s vice president of access services, said of the accelerator idea.

DIB Director Josh Marcuse also gave a bit of an update to the 12 previously established recommendations that the board made after its first meeting in October 2016. For example, the DOD recently hosted its first innovation corps bootcamp, Marcuse noted — a development in recommendation number one: “build innovation capacity in the workforce.”

The meeting wrapped up with public comments and positive words from Schmidt. “I think this has been a great use of our time,” he said in closing. “Thank you.”

The board will meet next in April. 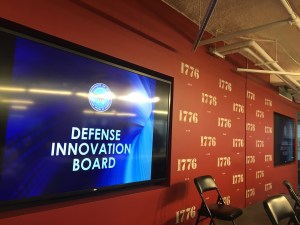