The Department of Veterans Affairs has appointed Todd Simpson its new head of DevSecOps — the software methodology that aims to bake cybersecurity into every step of the application development lifecycle.

Simpson, whose official title is deputy assistant secretary for DevSecOps, was sworn in by the VA CIO James Gfrerer, according to the VA’s Office of Information and Technology LinkedIn page.

He brings decades of government IT experience to the VA. Previously he served as CIO of the Food and Drug Administration and associate CIO of the Department of Transportation.

Most recently, Simpson was the chief product officer of the Department of Health and Human Services. In February, he described his role at HHS as finding “solutions beyond the desktop” and leading projects to collect data into a central hub.

“We are trying to answer questions that were previously unanswerable,” he told Government Matters of his work with deep data and advanced analytics.

The VA is larger than Simpson’s previous agencies. The department has a more than $100 billion annual budget with almost $5 billion proposed to be dedicated to IT in the budget request for fiscal 2021. The VA has been pushing for modernization across its different services, including a massive overhaul of its electronic health record system.

Simpson’s new job at the VA appears to focus primarily on software development. DevSecOps is growing in popularity with other IT offices in federal agencies creating offices around it, like the Department of Defense. The Army just launched a software factory that aims to bring “true DevSecOps” after a GAO report found minimal use of the development practice.

Simpson will also bring the experience of being a veteran himself. He served in the Air Force for three years of active duty and three years in an active reserve capacity. 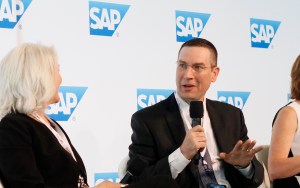