Department of Veterans Affairs Secretary David Shulkin joined President Donald Trump at the White House on Thursday to launch an expansion of the VA’s telehealth program.

The VA is also going to begin its nationwide rollout of VA Video Connect, an app that allows veterans to connect to VA providers anywhere in the country. The app is currently being used by about 300 providers at 67 VA hospitals across the country, Shulkin said, but its further expansion holds great promise for rural veterans who struggle to get specialized care.

Shulkin also announced the national rollout of the Veterans Appointment Request, a mobile app that veterans can use to book primary care and mental health appointments. The app is currently available for download. The VA recently awarded a $19.6 million contract for another mobile, self-scheduling app in line with requirements in the Faster Care for Veterans Act of 2016.

In his comments, President Trump praised the progress made under Shulkin.

“These accomplishments are only the beginning,” Trump said. “We will not rest until all of America’s great veterans can receive the care they so richly deserve.”

But telehealth has been a priority at the VA for years. In August 2016, Kevin Galpin, acting executive for telehealth, detailed the history of the VA’s work in this area in his testimony before the House Committee on Veterans Affairs. 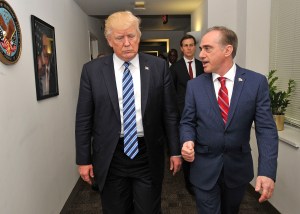