The White House’s deputy chief of staff for policy, who started his tenure in the administration at the Office of American Innovation, used his remarks at Tuesday’s FedTalks 2018 to give a year-end valediction of sorts on the IT modernization progress the government has made since he appeared on the FedTalks stage last year. And the report card is glowing.

“I’m very, very happy with the amount of progress we’ve had,” Liddell said.

Liddell cited both strategic initiatives and key personnel hires as among the achievements of the past year. On the subject of the former, Liddell pointed out that the IT Modernization Centers of Excellence, which he spoke about in a very general sense last summer, are now operational and nearing the end of phase one in the U.S. Department of Agriculture. The CoE initiative is “alive and well,” Liddell said. “That’s probably one of the things I am most delighted about in the past year.”

As the initiative’s “lighthouse agency,” USDA is really devoted to the project, Liddell said. The agency is also helping to craft what it will look like moving forward. “What we’re doing is documenting a lot of that so that we can use it for subsequent agencies,” he said, adding that he expects an announcement about which agency will host the CoEs next to come “in the next few weeks.”

But the CoE initiative wasn’t the only win Liddell wanted to talk about. The President’s Management Agenda, another oft-touted policy initiative of the Trump administration, holds updating the government’s technology as one of its key tenants. And President Donald Trump’s May executive order on CIO authorities is furthering the long-standing goal of giving tech leaders more power within an agency — it has “really given FITARA teeth,” Liddell said.

These initiatives wouldn’t get off the ground without the right people, though, and Liddell cited the Office of Management and Budget’s Deputy Director for Management Margaret Weichert and federal CIO Suzette Kent as among the government’s key recent hires, as well as the General Services Administration Administrator Emily Murphy and the Technology Transformation Service’s Joanne Collins Smee. He also name-dropped some who’ve been around since the previous administration, including acting U.S. Digital Service Director Matt Cutts.

But it may not always remain that way — Collins Smee recently announced that she’ll be leaving GSA after nearly one year of service. It remains to be seen who will take over the CoE leadership role, but Liddell said the agency has a “fabulous shortlist” of options.

Finally, Liddell told the crowd to expect “more of the same” in the next year. 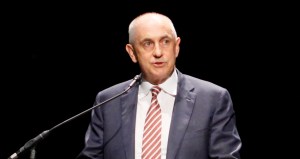 Chris Liddell is ‘very, very happy’ with IT modernization progress in the past year