Editor’s Note: This story has been updated to reflect a statement from an OPM spokesperson.

It’s unclear who will fill in for DeVries in the interim. His deputy is currently Rob Leahy. The spokesperson said the agency is focused primarily on its “mission of supporting a world-class workforce and expect to maintain continuity of services as the agency transitions to new IT leadership” after DeVries’ departure.

DeVries joined OPM as CIO in August 2016, leaving his post at the Defense Department as principal deputy CIO under then DOD CIO Terry Halvorsen. Prior to that, the OPM CIO position remained vacant in an official capacity after Donna Seymour abruptly retired from the position in February 2016 in the wake of the catastrophic breaches of federal personnel and background check records. She was succeeded by David Vargas and then Lisa Schlosser in a acting capacity before DeVries was hired to fill the position permanently.

During his yearlong tenure at OPM, DeVries’ work focused on continued modernization of the agency’s aging IT infrastructure and business systems, consolidating data centers and improving cybersecurity, among other efforts. 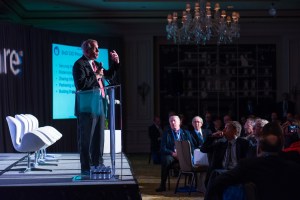