As 2017 kicked off, many wondered how the change in administration would affect departing President Barack Obama’s tech talent initiatives, among them the Presidential Innovation Fellows Program, the U.S. Digital Service and the 18F team.

Would President Donald Trump, not known for being a huge fan of Obama’s legacy, come right out and end the programs? Would they die a slower death caused by the tech community’s disinterest in working under the new president? Or would they survive and even thrive? There were a lot of questions in the air.

Now, as the year draws to a close, are any of those questions answered? Here’s a look back at FedScoop’s reporting on 18F, USDS and the PIF program in 2017.

By all indication, USDS is continuing strong. In the organization’s periodic report to Congress in July, acting Administrator Matt Cutts wrote about the projects the team has tackled, like the single sign-on login.gov (shared between USDS and the General Services Administration’s 18F) or the continued improvements at vets.gov. USDS employees have also built a Trusted Traveler Comparison Tool for the Department of Homeland Security and also helped the U.S. Citizenship and Immigration Services bring its N-400 application for naturalization online.

The criteria for selecting these projects also remains much the same. “USDS continues to prioritize projects based on three criteria,” the July report states. “What will do the greatest good for the greatest number of people in greatest need, how effective and cost-efficient the USDS investment will be, and the potential to use or reuse a technological solution across the Government.”

From a headcount perspective, it is hard to say how the organization now compares to years passed. USDS did not respond to a request for comment on the current size of the organization. But the office has continued to hire — most recently announcing the eight newbies who joined in November.

In leadership, Cutts, a former Google engineer, has been serving as acting administrator since Mikey Dickerson left at the change in administration.

The PIF program is perhaps the best example of an Obama-era creation continuing virtually unchanged.

After the bipartisan TALENT Act to codify the program became the last bill Obama signed in office, the year-long tour of duty fellowship has continued. The most recent cohort, the first under Trump, kicked off this fall, a bit delayed by the post-inauguration hiring freeze.

But now there are new fellows and new program leadership, too: Ben Willman — a PIF from the class of 2013 — is serving as acting executive director.

But it hasn’t been without its challenges. A July blog post by Noah Kunin, announcing his departure from 18F out of concern for the ways he saw the Trump administration undermining democracy, prompted quite a bit of soul-searching among his peers on what it means to be in public service. The core question: Where’s the line between apolitical work and complicity with values you don’t believe in?

Another issue lies in ongoing organizational changes at GSA. In June, the agency’s Technology Transformation Service, under which 18F is housed, was reorganized under the Federal Acquisition Service. At the time, FAS’s commissioner position was changed to be politically appointed. Then, earlier this month, TTS Director Rob Cook was removed from his role quite suddenly. Instead of taking a separate position at GSA, Cook decided to leave altogether.

What all this means for 18F, though, is not immediately clear. Despite these myriad questions, 18F cofounder Aaron Snow is hopeful.

“The bottom line on this stuff is that it all survived,” he said of 18F as well as USDS and the PIF program. “I think they all survived because they all provide value.” 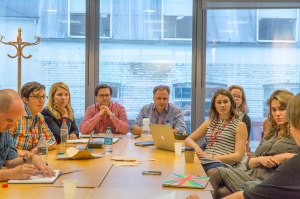 Still here: All the things that happened with 18F, the USDS and the PIF program in 2017