Amid both a massive reorganization and ongoing IT modernization efforts, the General Services Administration is losing the head of its technology-focused acquisition team.

Kay Ely will retire from her role as assistant commissioner for the GSA’s Office of Information Technology Category later this year, FedScoop has learned.

First, Ely will assume a role in GSA’s pending adoption of the Office of Personnel Management’s Human Resources Solutions operations, heading a task force to guide the merger.

The move comes at a time when GSA has several large IT modernization initiatives underway. Federal agencies are still navigating the transition to the $50-billion Enterprise Infrastructure Solutions telecommunications contract, the rollout of the Alliant 2 IT contract, contract schedules reform and several others project.

Ely, who came to GSA from OPM in 2011 and took over the IT category office last year, has been the face of many of those efforts.

She discussed the progress agencies were making on the EIS transition last month, saying to agencies who wanted an extension for implementation efforts beyond the 2020 deadline that it “was out of the question” without significant system transformation.

She also told audiences at FedScoop’s IT Modernization Summit in April that the Trump administration’s focus upgrading federal technology, combined with legislation emanating from Capitol Hill, had made true modernization a closer reality than it had probably ever been.

“I’ve been doing this for a really long time,” she said. “What’s in [the president’s IT modernization report] is, ‘You are going to do this in 30 days, you are going to do in 60 days.’ That’s unprecedented. We’ve never had that kind of clear road map of what needs to get done.”

But the OPM HRS merger has dominated much of GSA purview lately. Agency officials released a request for information last week that called for industry input on the integration and detailing the timeline for the process, scheduled to finish by March 30, 2019.

GSA administrator Emily Murphy told Congress last month that the move will help the agency leverage its shared services operations and IT infrastructure to provide strong service to federal employees.

Ely is expected to leave GSA on Oct. 1 for a 90-day detail on the OPM merger taskforce and retire from federal service by the end of the year. GSA officials told FedScoop that they have yet to name a replacement.

Along with Ely’s departure, David Zvenyach, the Federal Acquisition Service’s assistant commissioner for the Office of Systems Management, and Joel Minton, executive director of the Login.gov program, are also leaving federal service for the private sector, FedScoop learned. 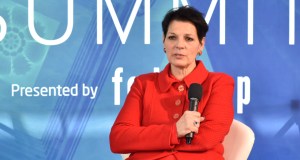 IT acquisition leader Kay Ely to retire from GSA