Any change in administration will entail a changing of the guards in agency leadership. Even in  CIO offices, where many roles aren’t political, agency CIOs may see the changeover as an opportunity to move on.

The past year has certainly been no exception to this rule. All year long, federal agencies have been a veritable revolving door of CIO comings and goings. In many cases the agencies have found official replacements for empty seats, but in others a deputy is filling the role on an acting basis. Where the Trump administration has chosen an official replacement, most have come directly from the private sector.

Lawmakers and others have decried the fact that these roles aren’t filled permanently. “I think everybody would say we wished there were more permanent people in the position,” Congressman Will Hurd said at an event in September. “If you’re not permanent, you’re not going to…probably do anything earth shattering, and that’s unfortunate. But guess what? These are realities we have… This is a problem we’re probably going to deal with for the next couple of months, but it can’t stop what we have to do.”

As 2017 draws to a close, here’s a look back at FedScoop’s ongoing coverage of who’s departed, who’s arrived and where we stand.

Editor’s note: This list focuses on CFO Act agency CIOs and a few others that experienced turnover this year. Some agencies haven’t undergone any CIO leadership changes in 2017 and therefore don’t appear on this list.

In August, Agriculture Department CIO Jonathan Alboum was moved to a new role within the agency as part of Secretary Sonny Perdue’s senior-level restructuring initiative. In September Perdue announced his further plans for “realignment” — his bid to streamline from 22 CIOs agency-wide as a way to be more mission-focused.

Gary Washington, CIO of USDA’s Animal and Plant Health Inspection Service, is currently serving as the acting CIO of USDA.

Additionally, U.S. Patent and Trademark Office CIO John Owens retired from his post in October after 10 years on the job. He has since joined CGI as vice president of its solutions development group.

While it is a politically appointed role, Defense Department CIO Terry Halvorsen received special dispensation to stay on at the Pentagon until Feb. 28. Following his departure, deputy John Zangardi took over as acting CIO until President Donald Trump appointed him to the Department of Homeland Security CIO post in October.

The office is currently under the purview of acting CIO Essye Miller. Miller was previously DOD’s CISO.

The Department of Energy named Max Everett CIO in July 2017. Everett came most recently from the private sector, where he was managing director of the cybersecurity company Fortalice Solutions. Everett also served as CIO in the Office of Administration at the White House under President Barack Obama in 2008.

FCC CIO David Bray left the agency in the fall and, instead of heading to the National Geospatial Intelligence Agency as initially expected, departed the government altogether to join the People-Centered Internet Initiative.

Christine Calvosa is currently serving as the agency’s acting CIO.

After months of Deputy CIO Kevin Cooke’s filling the role on an acting basis, the Department of Housing and Urban Development picked Johnson Joy as CIO in June. Joy arrived at HUD with more than 20 years of IT experience in the private sector, the agency said at the time.

Vicki Hildebrand was named CIO of the Department of Transportation in October. Hildebrand came to the agency from the private sector, most recently serving as vice president for customer and partner advocacy at Hewlett Packard Enterprise.

Department of the Treasury

After three years in the role, Treasury CIO Sonny Bhagowalia was reassigned within the agency in June. Deputy CIO Eric Olson is still serving as acting CIO.

Rob Thomas stepped into the role of acting CIO at the VA after LaVerne Council stepped down from the position in January at the change in administrations. But then in September, Thomas announced his retirement. He left his post in October — Scott Blackburn currently serves as the office’s “executive in charge” and acting CIO.

Environmental Protection Agency CIO Ann Dunkin decided to take a new role as CIO of the County of Santa Clara, California, when Trump took office in January. Steven Fine has been serving in an acting capacity since.

Dorothy Aronson became the CIO at NSF on Dec. 1, a NSF spokesperson told FedScoop. Previously she was serving as acting CIO after the agency’s former CIO passed away in May.

Office of Personnel Management CIO Dave DeVries left his post in September after just over a year on the job. The agency quickly found a new CIO in David Garcia.

After CIO Rob Klopp left the agency in April, Deputy CIO Herb Strauss took over as the acting official. A more permanent solution was found when Rajive Mathur, an agency vet who served as IRS’s director of online services for six years, was appointed to the CIO role in June.

Office of Management and Budget

Perhaps most significantly, OMB still lacks an official federal CIO nearly one year into the Trump administration. Deputy Federal CIO Margie Graves has been filling the role in an acting capacity since Tony Scott left in January. 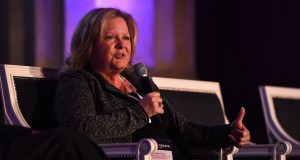